I can't believe my baby boy is 2 today! Although he does have many moments of being whiny and stubborn, I wouldn't say it is terrible. This is such an adorable age! I have definitely become one of those moms who thinks that everyone loves hearing about all the cute things my child has done as much as I love talking about them. For that, I am sorry. I just can't help it!

As I have mentioned before, I have failed miserably at keeping up with Will's baby book. So, I will take some time now to document what he is up to these days!

He loves to play at the park; The big slides, swinging high, hanging on the monkey bars and dropping into your arms. He loves kicking and throwing balls in the backyard and in the house. He loves to stack anything and knock it down. He loves jumping off the couch into a pile of pillows (or onto daddy)! He loves watching videos of things crashing and exploding. He loves doggies and kitties, cars and trucks. Veggie Tales.

He still doesn't have a huge vocabulary, but it's the cutest thing hearing him talk when he does! He knows where a lot of his body parts are, and Dean claims he knows the colors blue and green.

Still doing great on the sleeping front. He has his little routine at night: He will go into his room, turn on his sound machine, turn off the light, and come out to say goodnight to Bob, all his toys, and kiss daddy goodnight. I'll sit in the rocking chair, and he'll climb onto my lap. Resting his head on my chest, belly to belly. He still has his binky's. He will mostly just hold on to them, but sometime will have one in his mouth. He has never been one for lullaby's; It would just distract him. He will usually figit for about 5 to 10 minutes, trying to get comfortable. If possible, he prefers to have his cheek resting on my bare skin, and will pull at my shirt to try and accomplish that. Sometime he will zonk right out, but I usually end up laying him down in his bed awake, put on his blanky's, kiss him on the head and tell him I love him. He'll respond with a "yeah" and the sweetest "bye" you'll ever hear. He sleeps right through the night until about 7:30am, and still takes a great nap.

He hasn't showed any signs of wanting to potty train. I used to say that I would never have two in diapers. Yet here we are! But actually, I am glad I didn't put in all that effort to train him, because his time in the cast would have just shot that all out the window.

He had his 2 year check up this week. Measuring in at 35 1/2 inches (70th percentile) and 33 lbs (90+ percentile). The doctor called him overweight. Ha! Maybe I am blind to it, but he just doesn't look fat to me! He is even losing his buddha belly. I say it's all the muscle he has. Doc said he looks great! She wasn't worried about his lack of talking at all.

It is so much fun looking back at his 1 year photo's we took, and seeing how much he has grown! Here are some cute comparisons: 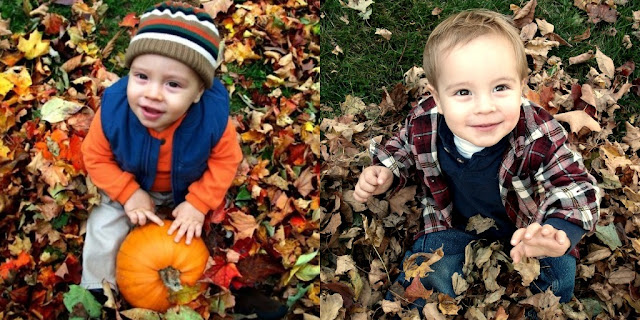 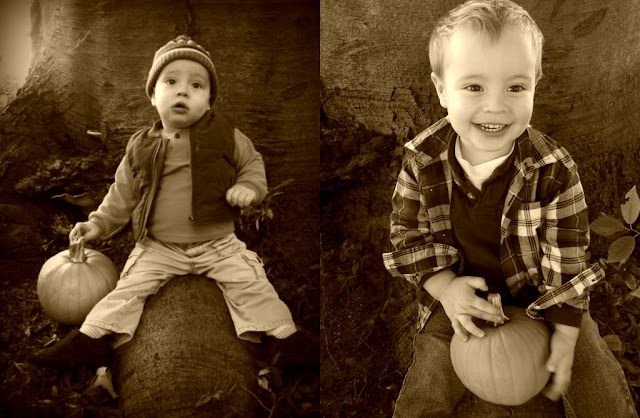 I remember having a tough time getting him to crack a smile at 1 year old, but this time all we had to say was, "Smile Will!" and we'd get this winner of a face..... 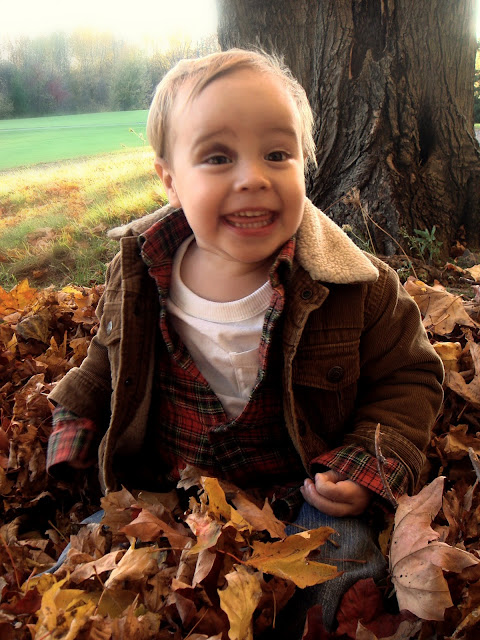 And yes, that is a black eye you see. His first day walking on his own after getting his cast off, he got his feet all twisted up while at the park and smashed into a metal railing. He was quite the site limping around with his swollen, purple eye. Such a tough guy!

I love my little man so much! Happy 2nd Birthday, Will!