It has been 2 weeks now since I cut sugar, grains and (most) dairy from my diet. My second day into it I experienced what is called candida "die off." Since I wasn't eating anything the candida could eat, it began to die. Which can create a whole host of problems, including:

In my case? On my 2nd day, I woke up early with stomach pains; Feeling like I was very hungry. Laying in bed, I began to shake. I felt like I was going to pass out even though I was laying down! I got out of bed, grabbed an apple and some water, and sat down on the bathroom floor. I drank the water, ate some of the apple and went back into bed to care for crying Sam. Shortly after, I began to feel nauseous, and had to rush back into the bathroom to throw up what I had just eaten.

I experienced the die off when I first did the candida cleanse 2 years ago, so I knew that it would most likely happen again. But I was only 1 day into it, and the first time around it took 2 weeks! Which is why at first I thought it might be a stomach bug; I didn't think I would be having those symptoms so quickly! How did I know it wasn't a bug? I ate a piece of toast. If I continued to feel bad, and throw that up it was most likely a bug. But I ate it, and I felt fine. The bread fed the candida. That whole fiasco lasted a few hours. After eating that toast, I went right back into eating right, and, thankfully, haven't had to deal with it again yet.

That first week continued to be super tough. I had jumped into this diet pretty quickly, and wasn't as prepared as I should have been. One of the hardest things about eating this way is the amount of time it takes to prepare food. I'll admit, I did not eat hardly enough that first week. Especially for being a nursing mom. But I hated it. I wanted to eat!  My reason for doing this is to clear up my skin (which really is just a sign that something isn't right in my insides). I am not doing this to lose weight.

Sure, I have some baby weight left. But my baby is only 5 months old! It took me a good 8 months to lose all my baby weight from Will, so I'm not expecting anything less this time around. In fact, if it took longer I wouldn't be surprised. I have a lot less time these days being a mom of 2, and some days working out just doesn't make it on my list! Since I started this diet I have only worked out once, and it was just a walk/jog around my neighborhood. I'd like to workout more though. I know how important exercise is to help sustain a healthy lifestyle. Once I have a good grip on my eating I will add working out back into my routine.

So, the first week my skin continued to get worse and worse. By day 6 it was the worst it has ever been. I knew that it was normal for symptoms to get worse before getting better, but it was still a bit depressing. Going into week 2, I finally began to see some changes! Everyday it was a little less red. A little less sore. A little less dry. By this past Saturday it was looking great! I was very excited to see results, especially since that was the day of the baby shower I had been planning for my sister in law, Anna! After eating great for almost 2 weeks, I thought I could handle cheating a little bit. I was wrong.

Just a few hours after treating myself to a taste of some of the fabulous desserts a red, dry spot appeared on the corner of my eye. By the end of that night it had all come back. I was so mad at myself! As delicious as the food was, I realized it wasn't worth it.

So, here we are. I jumped right back into eating well, and my face has calmed down a bit. For now I will continue to eat this way, and with the help of my MIL I am looking into some more options to try and get to the bottom of this. I'm trying to stay positive, although some days are harder then others. I would appreciate your continued prayers and words of encouragement! And if you have any tasty food ideas, please share!
Posted by Stacey No comments:

Sam is 5 months old today! He continues to be a sweet and happy baby. He loves playing and chewing on his toys, and along with all of the drooling and fussing he has been doing lately my guess is that he he is teething. Although I haven't spotted anything yet! He is working on his sitting, and loves to be in his Bumbo chair. He loves to be rocked and nursed to sleep, and LOVES snuggling in bed with his mommy! 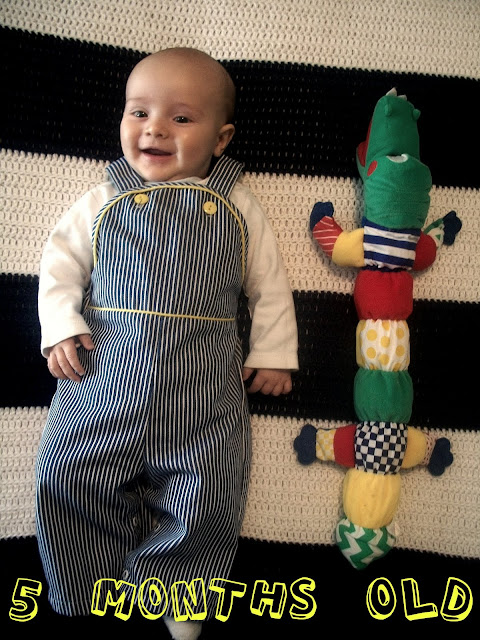 Baby, you've gone and growed up on me!

So there we were. Sam was nursing, and I was eating my bowl of mashed up pinto beans. Just minding my own business. When all of a sudden my little baby (who was just born yesterday, right?) grabs my spoon and shoves it into his mouth! 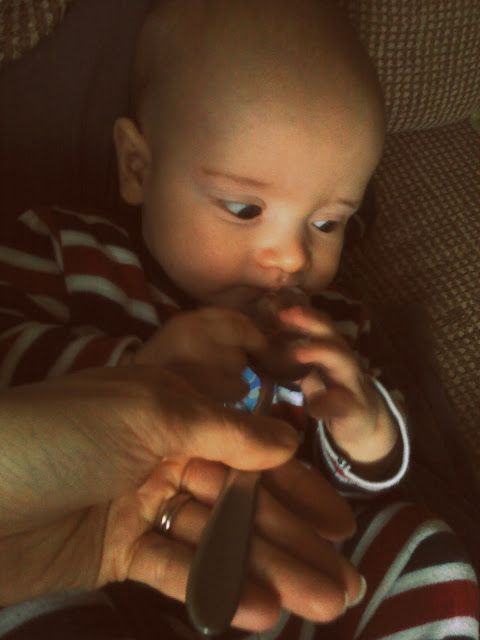 It was his first ever taste of real food, and he seemed to really enjoy it. At just a tad bit shy of 5 months, I was planning on waiting a bit longer before introducing food to him. But I guess he has plans of his own!
Posted by Stacey 1 comment:

2 years ago I started getting small, red, dry spots on my arm and hand. Over the course of just a couple weeks it spread all over both my forearms and on my hands and finger. It stung when it got wet, and itched like crazy. I tried some creams, but nothing was helping. As annoying as it was I wasn't being to pro-active about finding something that worked. Until, that is, it started showing up on my face. My forehead was dry as can be, and under my eyes became red and dry. It looked terrible, and it stung as well.

After doing some research I decided to give a candida diet/cleanse a try. So began a 10 week journey of eating no sugar (not even fruit with the exception of berries), carbs (includes ALL types of grains) or (some) dairy, along with taking (nursing friendly!) supplements 5 times a day. This was summer of '09. My face cleared up within a couple weeks, which was great! So maybe it was diet related; An allergy of some sort? By then end of those 10 weeks, the rash on my arm and hands had gotten much better, but it wasn't completely gone.

Eating that strictly was hard. In fact, it really sucked. Having to bring my own cooked up veggies and plain ol' piece of chicken cooked in lemon juice to BBQ's, and watch everyone partake in burgers slathered in ketchup and pasta salads with chunks of cheese. And let's not forget the smorgasbord of desserts that followed.

After eating almost perfectly for 10 weeks, I gradually began incorporating carbs, sugar and dairy back into my diet. My skin problems gradually started coming back. Over the next 6 months or so, still eating "normal", they came and went. I tried many different kinds of creams, salves, and oils. Nothing I used topically helped. Not even a little. I saw an herbalist who did a high tech analysis of my body, and started taking a bunch of supplements, focusing mainly on healing and strengthening my liver/small intestines. Although they did help with other things, I didn't notice any change in my skin. I began to realize that it seemed to flare up whenever I was stressed, and was particularly bad during that time of the month. So maybe it was stress and hormonal?

Then Spring of 2010, I got pregnant. I was sick for most of April and May, and my skin cleared up almost perfectly. Sure, I was hardly eating anything, yet my body had never been more stressed or hormonal than it was then! So was it food related or hormonal? Throughout my pregnancy with Sam my skin flare ups would still come and go, mainly on my face. I had a great pregnancy though! I contribute a lot of that to having a healthier liver. Although all of those supplements I was taking didn't seem to help my skin, by healing my liver I had almost no heartburn, no swelling and didn't suffer from Cholestasis like I did while pregnant with Will!

I have still been struggling with flare ups on my face since Sam was born, but it never got too bad. I was usually able to cover it up pretty well with some makeup. I tried to limit the amount of sugar and carbs I ate, but was still eating them.

Which brings us to the present. A week ago (just in time for Easter, yay!) my face started to get bad again, and within this past week it has gotten worse then it has ever been before. It is red, dry and stings all under both my eyes. Make up does nothing to cover it. I am so fed up with this! I hate having to go out and talk to people when I look like this. So, starting today I am going to start a candia cleanse again. There are so many fun events this month that involve food too! Mother's Day brunch, baby shower, cookout with friends, a wedding, my Birthday! It is going to be very hard to stick with it, but I also would rather not look like death during all of those events.

I would love some words of encouragement, prayers for healing, and please, oh please, don't tempt me!
Posted by Stacey 1 comment: