A bad boo boo, the brightside, not running a race and gettin' things organized

Life man. It can knock you off your feet sometimes. It was all just weird and awful and I am glad it is over. I got this tiny little cut on the bottom of my foot while doing dishes, from a piece of glass that was in my little kitchen throw rug. It bled. I put on a bandaid. It stopped bleeding, so the bandaid came off. It's summer, so unless I am going to a store or the gym my feet are bare. We played outside, we spent the weekend at a friends lake house (swimming, boating, etc.) and a week after cutting my foot we spent the afternoon at the beach. At this point the cut had pretty much healed up, but once home from the beach it started to hurt. I thought maybe something was in there, so I soaked my foot and dug around with some tweezers. I didn't find anything. The pain continued to get worse. We were now in bed on a Wednesday night, and the pain was so bad I could not get to sleep. It was a throbbing, sharp pain. Top 4 most painful things I've dealt with. By 1am I was pretty miserable, so I woke up Dean. He was very sweet and got some couch cushions stacked up in bed to elevate my foot and got an ice pack. It took awhile but I finally got some sleep, even if it was only 3 hours. I was up by 5am. I lay there awake for a couple more hours until the boys woke up. Dean got them up, and we made plans for my sister to come watch them. I knew it was definitely infected. All swollen up with red streaks across my foot. I don't have a primary care doctor right now, so we went to the ER. 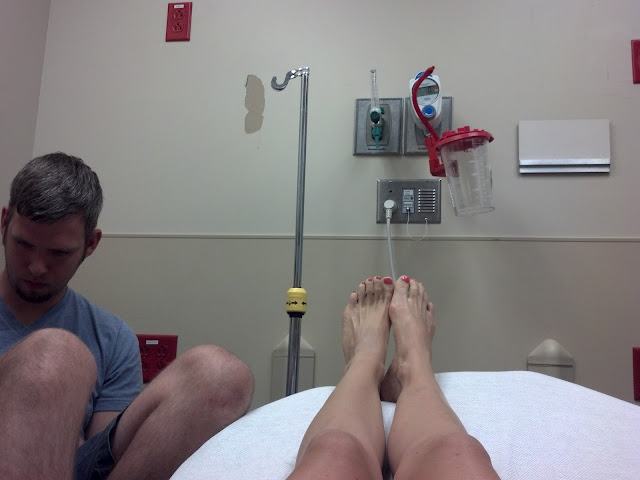 Thankfully there was no wait. Yes, it was infected. They prescribed an antibiotic and highly recommended I get a tetanus shot as well. Now, if you know me at all you know that I will do anything I can to avoid taking Advil let alone take antibiotics, let alone get a VACCINE! I was so bummed about it, but we felt like it was necessary. So, with the tetanus shot in my arm and prescription in hand we were free to go.

The pain in my foot became bearable as long as I kept it elevated. Getting around was entertaining, to say the least. Will and Sam were highly amused. By that night (Thursday) I began feeling sick. It all came on so fast. Fever. Body aches and chill. Headache. Sore throat and coughing. For the next 4 days I felt like that. I was convinced it was a bad reaction to the tetanus shot, having read that flu like symptoms could be a bad side effect. But then by Tuesday I had a rash all over my body, and by Wednesday my entire body from my fingers to my face was constantly prickly and tingly. It felt like needles all over my body. I did not want to have to go back to the hospital. I was trying to stay strong and get through it, but I was done. I couldn't take it anymore, physically or mentally.

Up until that day I hadn't cried through any of the foot pain or feeling sick. I'm naturally not a big cryer. But I found myself leaning over the kitchen sink trying to hold back tears, and a thought went through my head that if I were to cry it would mean I was giving up. That I would be letting this "sickness" win. But just as soon as that thought went through my head it was like God was telling me , "NO! That's bullcrap. Just go ahead and freakin cry already would ya?" So I did. I cried. And I cried and I cried. It felt good. As soon as Dean stepped in the door I started sobbing. I just didn't know what to do. I didn't want to go to the hospital, but I had no other answer of what to do. So, back we went.

Turns out I was allergic to the antibiotic I was taking. I had it stuck in my mind that it was the tetanus shot, but looking back it's like, "Duh!"

So, here I am today. Feeling pretty much back to normal. The rash went away within a couple days once I stopped taking the antibiotic. My foot is just the tiniest bit sore, but overall I am well. As I was dealing with everything I was trying to look on the brightside of things. Thankful that my husband makes his own hours and was able to be with me when I needed him and not have it effect his paycheck. Thankful that I have in-laws willing to watch my boys at a moments notice (and parents that could have as well!) Thankful that even though I missed out on mom's night out or the barn dance, I at least didn't have to show my face in public while having the biggest and worst cold sore I have ever had.

I am also bummed about not being able to run the 5k I have been planning on doing. I was really looking forward to kicking butt and beating my last time. But the race is this Saturday. It has been 12 days since I have worked out last (I'm dying to get to the gym!), and my foot is still a bit sore. So, it's not looking good.

During being sick and not able to walk, I would literally daydream about just being able to do the dishes or walk downstairs to do the laundry. It gave me some motivation to take advantage of my good health once it returned, and really try and organize and de-clutter my house. But since I know myself, and know that this self motivation to kick butt may be short lived, I thought I would make myself accountable to anyone who reads this. So, here is what I would like to accomplish this week (along with staying on top of normal housework):

- Organize/clean out my food cupboard

- Clean out my fridge

- Go through boys clothes and pack away stuff that doesn't fit (Also make sure ALL storage bins go back to the basement!)

- Clean off top of filing cabinet

- Go through and get rid of toys

I will post at the end of the week, and see what I've accomplished!
Posted by Stacey