As you may recall from a previous post, this past Christmas I made these ski bands as gifts for my sisters: 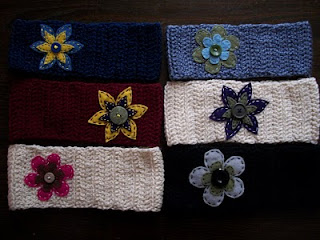 They all seemed to really like them, which was great! My future sister-in-law, Anna, thought that they would be able to sell them at a local high end clothing store, Thread, where she works. She showed her ski band to her boss, and her boss was interested! So, I met with her to chat about details (they would do 50/50 consignment). After thinking it over and talking to my main man, I decided that at this time, it wouldn't be worth the time and stress. But, perhaps I could take my time making them over the next 6 months, and then have them to sell come Fall 2010. So, those plans are still to be determined!

For now though, I decided to just make the felt flowers, and make them into hair clips to sell. I thought about selling them on Etsy. The upside to that would be more profit. The downside is that there are so many other people selling similar things that I feel like my stuff would just get lost in the mix. Plus, the idea of having to make multiple trips to the Post Office does not appeal to me. I met with one of the owners at Thread this past week, and she is cool with me trying to sell them there!

So, this past week has been filled with trips to Joann Fabrics, some fails, but many successes as I cultivate my creative juices to come up with some products I am happy with. My husband helped me create a logo too! Here are some examples of what I will be selling: 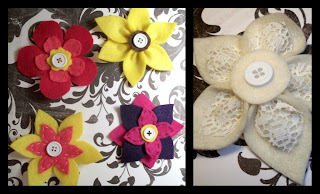 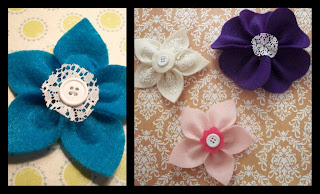 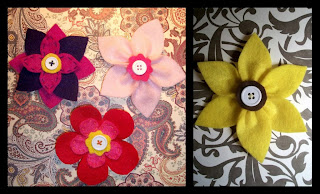 I am very excited about this opportunity! I don't have my hopes set too high right now. If they don't sell, then hey! I have plenty of gifts to give next Christmas!
Posted by Stacey