William and the Big, Red Cast.

Wow, what a week it has been! Definitely one for the books blog. For those of you still wondering what happened exactly, here is the story.

Monday was normal enough. Got to the YMCA for a workout while Will played in Childwatch. Went to Wegmans to do some grocery shopping, and then headed home for some lunch and naptime.

Will woke up from his nap at 5pm. As he always does, as soon as he got up he went straight to the fridge to get something to eat. I followed him, and let him get his peach out of the fridge. We started walking back to the living room. I was in front of him when I heard him fall. While trying to go up it, he had fallen back off of this step: 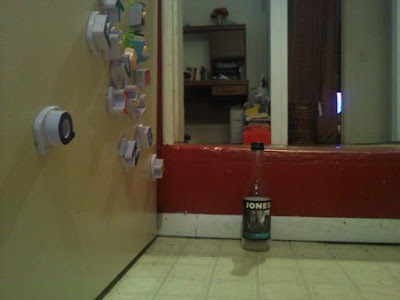 To give you an idea of the height of the step, that is a typical 12 oz glass bottle.

He started crying. I turned back to see him, and he was down on his side grabbing his right leg with both hands. I went over to him, thinking it was nothing a kiss from mommy wouldn't fix. I noticed that his right knee was red, and I assumed that that was what was hurting. I picked him up in cradle position, and kissed his knee. He wasn't calming down, so I continued to comfort him. I eventually carried him into the living room, and sat down on the couch to nurse him. After some crying and nursing he fell back asleep. Being as how he has just woken up from a decent nap, I knew something was off. Never did the thought that something was broken cross my mind. It was such a small fall!

For the next 1 1/2 hrs I held him as he was in and out of sleeping, nursing and crying. I texted Dean that Will had hurt his knee (so I thought), that he was miserable, and asked if he could get home from work any sooner then the expected time of 7:30pm. I eventually lay Will down on the couch with his legs propped up on a pillow, put some ice on it, and put on a video for him. Dean was home by 7pm, examined his leg, and said that his right thigh looked swollen. Every time he touched it Will would cry out and started shaking. I called the pediatrician, told her what happened, and she said to go to the ER. So, off we went. They got us right into a room, and after being examined we waited to be sent to get x-rays. The results of those were that he had a spiral fracture in his right femur.

It was heartbreaking seeing him in so much pain. He was very tired, and kept drifting off to sleep, only to wake up screaming every time he moved slightly. They had to try both hands before getting in the IV. Sometime around 1am-2am they gave him some morphine, and got him in a temporary cast. It was 3:30am by the time we got in our room, and were able to get some sleep. After about 4 hours of interrupted sleep we were up for the day. We spent the day just waiting for his time to come for getting the cast on. They finally took him in by 1:50pm. He had to go under general anesthesia. I wasn't happy about that, but I felt at peace about it knowing it was for his own good. He was only in the OR for 30 minutes, and we were able to see him by 2:40pm.

During the "surgery", as they referred to it, he threw up a bit. A side effect of the anesthesia. They were worried that he may have inhaled some, but x-rays came out clear. They still wanted to keep him overnight though, just to make sure. We were not happy about that, but it was for the best. It took awhile for him to fully come off the anesthesia. He had a rough time for awhile that evening. His heart rate was pretty high. Rising up to 199 at one point. We got some Motrin in him, and he fell asleep by 10pm. We had no more issues with high heart rates after that. He was up by 4:30am, and didn't go back to sleep until 11am! God's grace was definitely upon me. After 2 nights straight of only getting a few hours of uncomfortable sleep, and being 6 months pregnant, I felt surprisingly well.

We got the go ahead to leave that day (Wednesday). Because of the largeness of his special spica cast he is not able to fit in a normal carseat. So, he had to be transported home in a Medicab van. I rode with him, and he seemed to really enjoy being somewhere other then a hospital bed. We are still on the search for a suitable way to transport him in the car. They do make special "spica" carseats, but they are hard to come by, and very expensive.

So, here we are. It is Saturday (although I started writing this 2 days ago). He seems to finally be adjusting to having to wear the cast. For the first couple days he seemed scared of it, and would freak out whenever we had to move him. His sleeping has been all over the place. The first night home was rough. Thursday he took a great nap, and was much better at night. Yesterday he took no nap at all, and then last night slept horribly. He was up every hour from 12:30am until he came in bed with me at 7:30am. Hoping for a good nap from him today. I can use some rest!

All in all, we are doing ok. Trying to stay focused on the positive. Since Will can't get around and make messes every 5 minutes, my house is staying pretty clean! 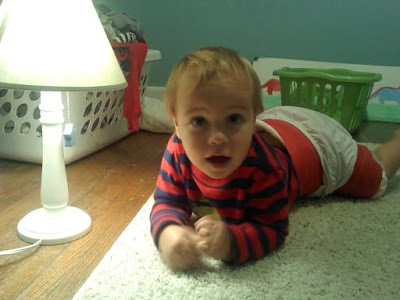